Twenty-five years have passed since NASA’s Challenger Space Shuttle was brought down by the misapplication of an o-ring that could not handle the extreme temperatures of the launch. While the tragic and heart-breaking loss of lives is incomparable, catastrophic failures of sealing products in semiconductor processing environments can put at risk millions of dollars in wafer loss and downtime.

How can seemingly innocuous o-rings have such a huge bearing on success or failure? If you stop and think about the thousands of o-rings utilised throughout a wafer fab – with so many types of equipment and their ultrapure environments housing dozens of processing steps – the pervasiveness and vital importance of seals becomes clearer.

Consider the wide range of sealing components, which range from the o-rings, chamber seals and fittings within each tool to the gates, slit valves and doors on highly sensitive equipment used throughout the chip making process. If these interfaces are not addressed as part of the ultraclean processing solution, they will certainly become part of the problem.

In a world where particles measuring 0.12 micron or less can cause killer defects,
o-ring composition becomes a critical concern.

Viton™, the predominant material from which o-rings are made, is available in many variations.

Most varieties are made with fillers that are unacceptable in ultra-clean processing – fillers such as magnesium oxides and silica-based additives that introduce large amounts of impurities to the process.

Over time, exposure to even the smallest traces of chemicals and gases can cause sealing components to wear and begin to break down. To the surprise of many technicians in the wafer fab, it is usually the cleaning gases used between all wet and plasma-based processing steps- not the deposition or etching chemistries themselves – that cause the most seal degradation. The problem lies in the harshness of the cleaning gases themselves which are typically NF3 or similarly aggressive fluorine or oxygen combinations. During cleaning, these gases literally blast the chamber walls to remove any residual radicals. Unfortunately, the cleaning gases also attack chamber components, including seals, with significant force and energy.

O-rings have not changed from original formulas

Another reason for seals’ susceptibility to damage from cleaning gases is that the physical makeup of the o-rings has not changed fundamentally from the original formulas created in the mid-1900's.

Even today, the majority of o-rings are made in industrial settings and carry with them all of the issues raised by non-clean room materials.

O-rings were initially developed for industrial and later, aerospace applications. For these markets, the seals had to withstand pressures of 500 PSI and more. This led to the use of industrial grade additives such as carbons, magnesium oxides and other fillers to create the needed strength and flexibility. At that time, the primary design criteria for o-rings were the abilities to withstand tugging, pulling and the dynamics encountered around rods and pistons. Early seals were never created to deal with significant contamination or vacuum requirements. 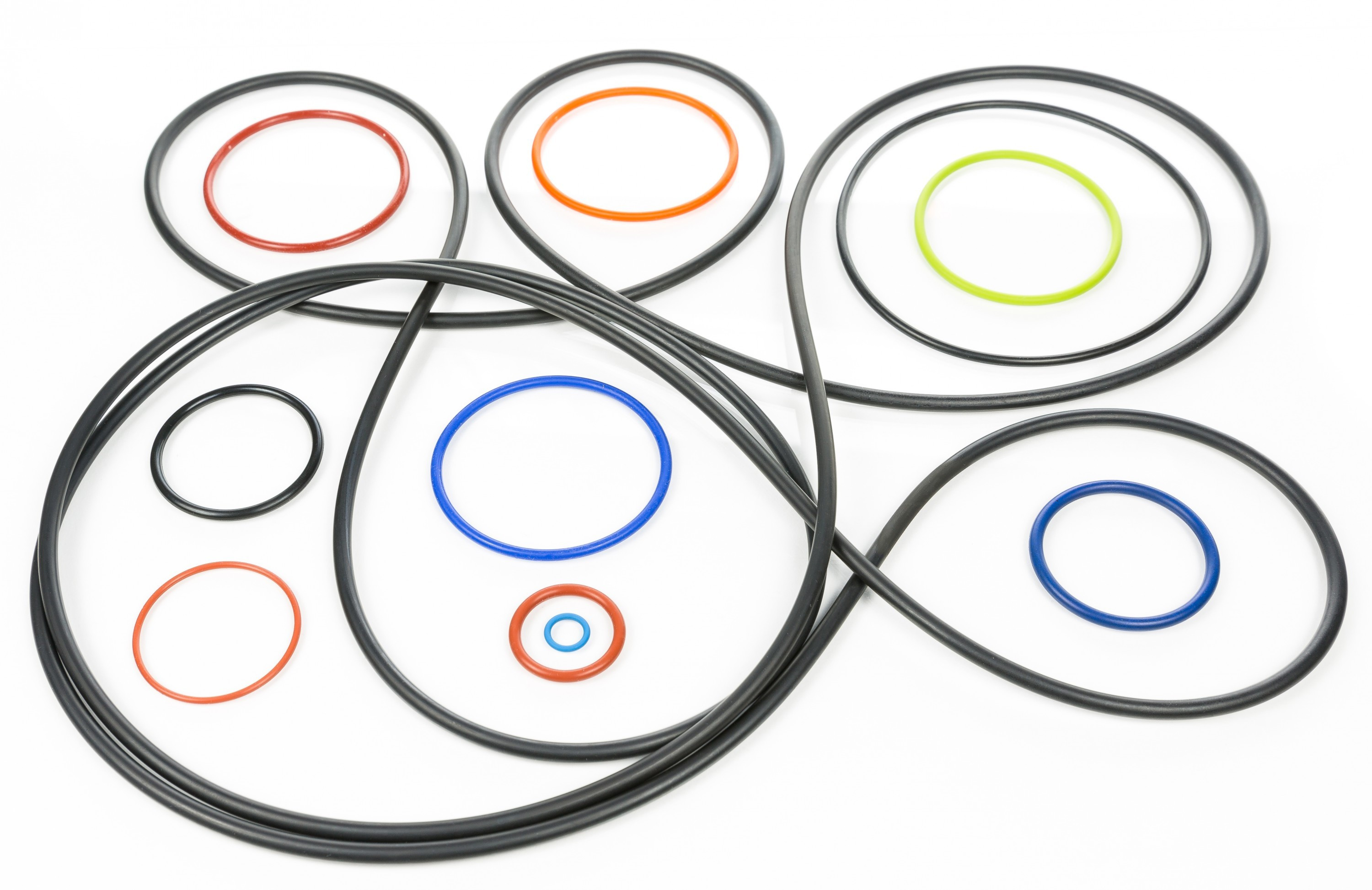 The importance of seals

Finally, many sealing problems result when seal selection and usage is an afterthought. Users may know that a seal is needed, but too often little effort is made to review the performance requirements, restraint, and physical demands that the installed seal will face. In many cases, seal providers or manufacturers are not consulted until problems arise. At that point, it is unreasonable to expect a quick-fix solution are little or no cost so that production timelines are not affected.

A smarter, more productive approach is to involve seal manufacturers earlier in the equipment design process. This way, seal providers can apply their in-house expertise and tools to design a seal that fits each application, helping to avoid problems downstream. One key tool is a process called Finite Element Analysis (FEA), which can verify seal performance before committing to custom tooling. FEA uses linear algebra and calculus to predict when a seal will fail when subjected to real world stresses. A computer model creates a virtual seal, complete with material and structural properties. 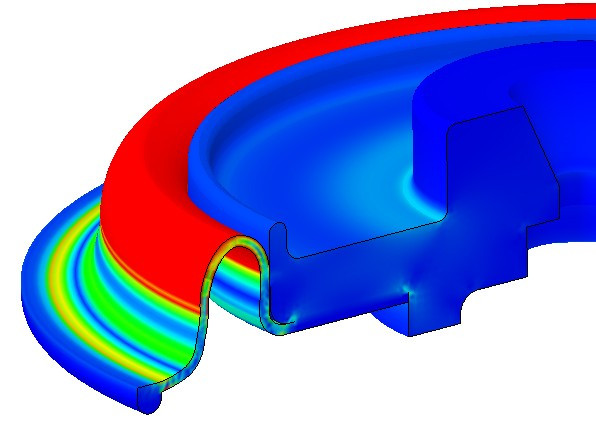 By subjecting the virtual seal to theoretical stresses and loads, seal designers can study potential problem areas and work to correct them before production begins. The FEA process is thorough but complex, involving approximately 120,000 simultaneous calculations. But this advanced analysis of a seal’s performance in its intended environment enables optimisation of the seal’s design which can reduce the time between preventive maintenance servicing and safeguard against contamination problems.

It's what's inside that counts...

Awareness of contamination issues began to increase in the 1980's. To address these new needs, seal manufacturers began using perfluoroelastomers. These materials have unique chemical and thermal characteristics that can help to assure cleanliness and process integrity, but they also come with some distinct handling requirements.

In o-ring language, FFKM is a common term used to describe a perfluoroelastomer with a completely fluorinated, more inert backbone. When properly designed seals made with FFKM can exhibit longer useful lives with reduced outgassing, lower contaminants, and greater thermal stability. Of all perfluoroelastomers, FFKMs can accommodate the widest temperature ranges- from up to 230°C for peroxide cured FFKM's to over 280°C for triazine based FFKMs.

Unlike Viton™, perfluoroelastomers have no exposed hydrogen positions. This helps to prevent chemical breakdown of the material, yielding cleaner and more durable seals. Although o-rings produced with FFKM's are chemically resistant, their carbon-fluorine backbones don’t contain the fillers needed to strengthen their mechanical properties. The fragile nature of these FFKM o-rings requires that they be handled delicately without undue stretching. But from my own discussions with end users, these sensitive seals are mishandled and damaged during more than 50% of all installations. It is not only incorrect; it is dangerous for maintenance technicians to assume that all seals have the same physical properties. Wider understanding of the key differences among various perfluoroelastomers among various perfluoroelastomers is needed throughout the global semi-conductor industry.

As with perfluoroelastomers, there also are many variations among available fillers and curatives. Peroxide, triazine and bisphenol are the top three curatives, and each has its own advantages and disadvantages. Fillers such as BaSO4 are used to help safeguard and o-rings base polymer from exposure to the harsh plasmas used in semiconductor fabrication, which can eventually etch away part of the o-ring. As a side benefit, using a BaSO4 filler with specific curatives can actually add some mechanical strength to FFKM material.

But the affects of fillers are not explained well enough to end users. For example, using a triazine based o-ring developed for high temperatures risks significantly shorter lifetime, greater tool downtime and more lost productivity compared to using a peroxide cured version with a filler specifically designed for such harsh cleans as NF3 cleans.

When considering seals, even visual cues can be misleading. The semiconductor industry tends to favour seals made with BaSO4 or TiO2 fillers because the resulting seal is white, which some people automatically associate with cleanliness. On the contrary, these fillers will break down in wet-processing applications and risk introducing metals into the processing chambers in either wet or dry areas if not applied properly.

Just as the use of different fillers can cause variations in seals, there are subtle but important disparities among the products supplied by different seal manufacturers. The utter lack of standards for semiconductor grade seals allows for potentially dangerous wiggle room among various formulation offered on today's markets. Without accepted international standards, there is little or no assurance to users that the seals they are using will deliver consistent, reliable performance.

The harsh reality is that this may lead to fab-wide manufacturing glitches that will cause downtime and reduced yield.

Clearly more communication and education is needed to select the optimal sealing solution that will protect the integrity of each manufacturing process and maximise performance.

Not all seals are created equal. Thermal, chemical and hardware considerations can greatly influence the type of seal needed for a specific application. Even within the family of perfluoroelastomer seals, there are variations in material composition that can determine if a seal is the correct choice or a given situation.

The people who will have daily responsibility for the installed seals-from maintenance technicians to facility managers – must be educated by knowledgeable seal providers about the variety of available products and why selecting the right solution involves much more than matching sizes and colours. When it comes to the materials science inherent in seals, the devil truly is in the details.

If you require support on seal selection complete our application form here.